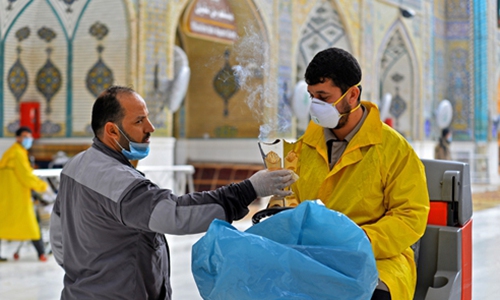 An Iraqi man blesses a worker, wearing a mask, with incense on March 3 in the courtyard of the shrine of Imam Ali in the holy Iraqi city of Najaf, where the first case of COVID-19 has been documented in Iraq. Photo: AFP

Since arriving in Iraq, the volunteer experts’ team of Red Cross Society of China has been coordinating work with locals for the control and prevention of the COVID-19, the Chinese Embassy in Iraq told the Global Times on Monday.

At the request of the Iraqi Red Crescent Society, the Red Cross Society of China dispatched a team of seven volunteer experts carrying medical supplies, such as nucleic acid test kits, masks and critical medical rescue equipment, to Iraq on Saturday afternoon and arrived in Baghdad Sunday, according to Chinanews.

“Knowing that a Chinese medical team and materials is on the way to Iraq, we feel more confident and relieved to have them in curbing the epidemic in Iraq,” Jiang, a manager of a China-built power plant construction site in South Iraq who asked not to be named told the Global Times on Monday.

He said that since the outbreak of COVID-19 in Iraq, the construction site has set up a quarantine zone and adopted systematic measures to prevent the epidemic including sanitizing the living and working areas on a daily basis and banning Chinese workers from going outside.

They were also popularizing knowledge on preventing the novel coronavirus. “Some local people may entrust their health to their religion and neglect the scientific way to protect them from the epidemic,” said Jiang.

The project is influenced by the epidemic that is spreading in Iran and Iraq as their construction workers from some neighboring countries such as Turkey were banned by their own government from getting here, he said.

Due to the virus, Chinese workers could not go back to China for vacation and the new workers cannot enter the construction site to resume work.

“Usually, we go back to China for a two-week vacation every six months, but influenced by the epidemic, some workers chose to stay on the site,” Jiang told the Global Times.

Travel between China and the Middle East may enhance the chance of infection, Jiang feared.

Ever since COVID-19 broke out before the Spring Festival, Jiang had started to buy extra food on daily basis.

“Now, we have enough food to support the whole 220 Chinese workers for more than two months,” Jiang said.

Most of Iraqis don’t take the epidemic seriously as they heard more voices from American and European countries, but less from China, a Chinese man who has been working in Iraq for 11 years told the Global Times.