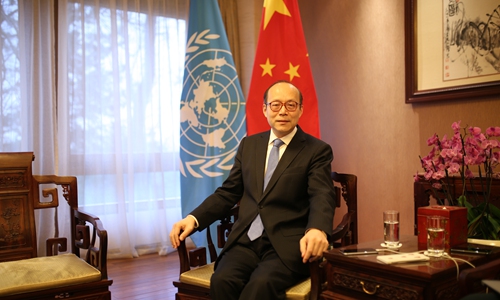 A Chinese candidate’s participation in the World Intellectual Property Organization (WIPO) director general election shows China’s willingness to make more contributions to multilateral cooperation. The loss of its candidate is not “a frustration” but a new start with the international patent agency, Ambassador Chen Xu (Chen), China’s Permanent Representative to the UN Office at Geneva and other International Organizations in Switzerland told the Global Times in an exclusive interview.

Daren Tang, the current head of Singapore’s Intellectual Property Office, outperformed five candidates from other countries, including China’s Wang Binying, the current deputy director general of the WIPO. Tang will replace outgoing director general Francis Gurry of Australia at the end of the year, according to a release from WIPO on Thursday.

WIPO is an agency under the UN that specializes in global IP services, policies and cooperation.

“Firstly, we congratulate Daren Tang of Singapore for being nominated for the post of director general of WIPO. We also want to thank the member states which gave firm support to us,” Chen told the Global Times.

He noted that during the election, the US has exerted much power to block China’s candidate Wang in every way. “Considering all of these moves, we had expected the difficulties and challenges of the election.”

Chen noted that many US senior officials, including US State Secretary Mike Pompeo and the former diplomat, former national security advisor John Robert Bolton, and Peter Navarro, director of the White House National Trade Council made frequent accusations in new media or during public occasions against China’s intellectual property protection policies and practices for months.

At a press conference on February 28, Chen noted that the Chinese candidate Wang, has spent 28 years in the agency and has been serving as a deputy director general since 2008. She enjoys great respect and is highly competent, according to the organization.

In responding to some media described Wang’s failure in the WIPO election as “a frustration” to China, Chen said that the result cannot simply be described as “disappointing” or “frustrating.”

“Our participation in the election is a gesture to demonstrate China’s willingness to make more contributions to multilateral cooperation with a more active attitude,” Chen said.

Chen noted that it has been nearly 50 years after China’s restoration of the lawful rights in the UN in 1971. For the past five decades, China has been in the process of learning the UN multilateral mechanism. It did not take a very active role in participating in the mechanism at the beginning of the 1980s.

“Our involvements with international affairs have to go with our pace of reform and opening-up. I believe that with China’s improving comprehensive strengthen, with the purpose of bringing happiness to the people and contributing to global development, we will take a more active and concrete role in participating in international affairs. And the fields should extend from political and economic to those specialized areas.”