To leave Iran, S.Korea or not 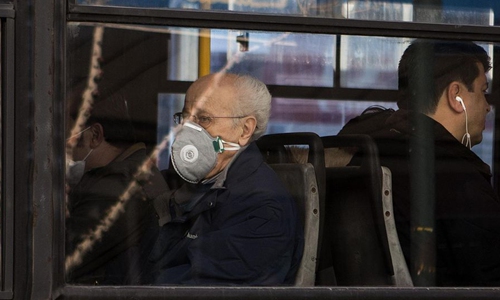 Another country that concerns people is Iran. An imported case from Iran was detected in Northwest China’s Ningxia Hui Autonomous Region as early as February 26. On Thursday, 11 new imported cases from Iran were confirmed in Gansu Province and one was reported in Shanghai.

Zhang Ming (pseudonym) returned to China from Iran on a chartered flight on Wednesday. He told the Global Times that he had been studying and living in the holy city of Qom, one of the worst-hit cities in Iran.

As more and more deaths were reported in Iran, he became increasingly nervous as the country’s medical facilities are not good. “I am also concerned about the Iranian lifestyle and their sense of personal protection. My parents in China have been urging me to come back. All my classmates, except for those with special reasons, are all anxious,” Zhang said, adding that in Iran, prices of masks have skyrocketed.

Because of the suspension of direct flights between Iran and China, flights from Iran back to China require passengers to transfer, usually in Russia or Thailand. “It would be more difficult if we encountered stringent entry measures in these two countries,” he said.

Currently, the first group of more than 140 Chinese people including Zhang who had taken a chartered flight from Iran to China are being quarantined in Lanzhou in Gansu Province. “The moment I boarded the chartered flight to China, I was overwhelmed with emotions. I was thinking I’m finally safe. Now I live in a single room apartment, and I eat and sleep well during quarantine. It’s totally relaxing,” Zhang said.

In South Korea where the coronavirus outbreak is serious, a Chinese national told the Global Times that South Korea did not pay enough attention to the epidemic, but that he had no plans to return because he would lose his job.

He added that foreigners are often among the first to be laid off as a result of the outbreak, which has reduced jobs, and these people may consider leaving South Korea to return home.

A woman surnamed Cui who lives in Seoul with her family told the Global Times that the situation in Seoul was not as serious as in Daegu, so many people have not taken it seriously. “The young people are fine, but the older people and children are more vulnerable,” she said. Cui plans to wait and see for a while, but if the situations deteriorates, she will consider resigning and returning to China.

As for Japan, its recent measures to combat the virus have drawn ridicule from local Chinese. Li Xiang, an office worker in Tokyo, told the Global Times that Japan’s response to the epidemic was not strong and at the beginning, the government, media and people paid little attention to it, acting like it was “other countries’ affairs.” As the outbreak grew more severe, companies began to implement measures such as working from home, but “it was too late,” she said.

Li was worried, but couldn’t make the decision to leave because she had a job in Japan.

For Chinese students in Japan, the decision to return home is also hard to make. Jiang Jiang, who attends a language school in Osaka, sent photos to the Global Times which showed that many people still do not wear masks in downtown Osaka. She questioned reports that the number of infected people in Osaka was only 17. Jiang said many Chinese students want to return home, but Japan’s policy is changing day by day. If they cannot enter Japan, their tuition fees will be wasted.

Oishi Kazunori, director of the health research institute in Toyama, told the Global Times that in general, unlike in Iran, the vast majority of Chinese people in Japan will not return home in the near future.

Those who want to go home are those who have been stranded for a short period of time. Starting from next week, Japan will impose quarantine measures on all Chinese people entering Japan and China has also imposed quarantine restrictions on travelers from Japan. The numbers of people and flights between China and Japan have been significantly reduced during this period, and the overall situation is under control, he said.

Newspaper headline: To Leave or not