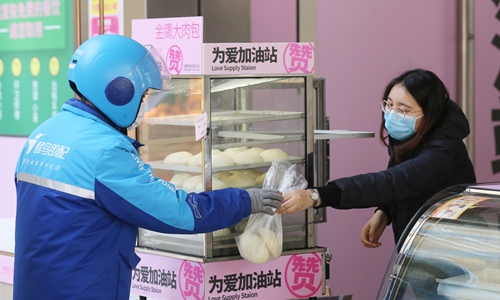 A food deliveryman in Nanjing, East China’s Jiangsu Province is offered free breakfast for his hard work during the COVID-19 outbreak in China. Photo: IC

For people hunkering down due to the coronavirus epidemic, the tech sector has become their new best friend with an array of lifestyle solutions making “social distancing” easier.

Those wanting to avoid crowds can have meals delivered from restaurants, stream blockbuster films, socialize online with friends and work remotely.

The latest tech-inspired lifestyle solutions are gaining traction as more people are advised to work from home, and many conferences and gatherings are canceled.

Anyone with an internet connection can use Amazon or e-commerce rivals to deliver provisions from groceries to toilet paper and over-the-counter medicine.

“We can have anything and everything delivered to our homes including hard and soft goods, doctor visits, laundry services, and even pet services,” said Moor Insights and Strategy principal analyst Patrick Moorhead.

“The irony is that many of the items criticized about technology have become a ‘safe’ place to escape to in the wake of coronavirus.”

Creative Strategies analyst Carolina Milanesi has been checking in daily with her mother, who lives close to Milan in a part of Italy hit by coronavirus cases and has kept to her home.

Video calling services like FaceTime have also helped with virtual doctor visits – or telemedicine – so patients can consult with physicians online and avoid visits to hospitals, she noted.

Milanesi told of a friend using online shopping tools to find coveted supplies such as sanitizing gel and wipes.

She also shared a news video clip of someone in China using a remote-controlled toy truck mounted with a GoPro camera to fetch supplies.

“When it comes to technology, there are different things that make isolation easier; from streaming video to digital books to gaming,” Milanesi said.

“We have also seen how social media has helped getting coverage from areas where press might have not been allowed.”

In a note to investors, analyst firm Needham said it expected people to grow increasingly uncomfortable going to gyms to work out, in a trend that should benefit the connected cycling maker Peloton.

Peloton has had a hit selling stationary exercise bicycles along with memberships to streaming online workout sessions that people can take part in from home.

In on nights out

Rivals in the increasingly competitive streaming television market also stand to benefit as people opt for home entertainment instead of risking contagion in public spaces, according to analysts.

More people could also start getting restaurant meals delivered from services such as Uber Eats and DoorDash instead of going out to restaurants.

“None of this undermines the horror of the virus but for those who want to stay home and not venture outside it works,” Moorhead said.

Software, services and the infrastructure needed to support them are in the best position ever to allow people to feel less deprived while distancing themselves socially, according to Consumer Technology Association research senior vice president Brian Markwalter.

Internet speeds have climbed in the past decades and smartphones are ubiquitous, Markwalter noted.

Telemedicine has made gains in recent years, and health monitoring is getting an added boost from smartwatches and fitness bands that can detect irregular heartbeats or whether some has taken a hard fall, he added.

Digital health innovation has been among the fastest growing sections of the association’s annual Consumer Electronics Show gadget extravaganza in Las Vegas.

People in China, Silicon Valley, Japan and Italy are all adopting remote working at various degrees to limit the spreading of the virus, according to Milanesi, pointing to services like the teleconferencing app Zoom.

“There is such excitement around remote work that brands like Zoom have seen their stock value climb up,” Milanesi said in an online post.

She wondered, though, whether the promise of working remotely will run into a wall due to a need to update employment regulations as well as “trust issues of managers who need to feel they are in control.”

“One would think that in 2020, productivity should be measured in output and not in hours,” Milanesi said.

“Ultimately, remote working should be seen as a business asset at any time, not just when we are under the threat of a pandemic.”