Risks rise in France, US 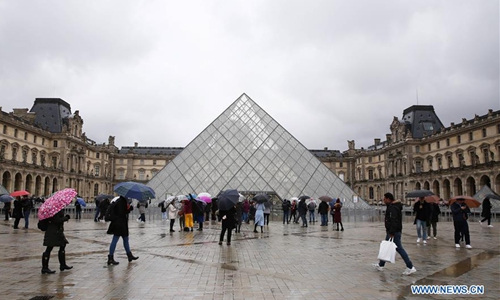 France, Germany, Spain and the US are considered countries where outbreaks are increasing in severity. Take France as an example. Cao Huaqin, a businessman from East China’s Fujian Province who lives in France, told the Global Times that he felt the outbreak would become more severe in France because the local control measures were not comprehensive.

“As far as I know, not many Chinese in France want to go back because of the epidemic. The Chinese here are also alert. Many have bought rice, water and daily necessities for three months and try not to go out,” Cao said. “The medical level in France as a whole is very advanced, and the current cases which ended in death are only elderly people with other diseases.”

“Chinese people in France feel more confident that they can be cured once they get sick, so there has not been a situation [where many are returning home] like in Italy,” she added.

According to Cao, not many Chinese in France have returned home recently for other reasons, as most have canceled unnecessary trips since the outbreak began. As far as he knew, the Chinese Embassy in France and the overseas Chinese communities have done their work in a comprehensive and meticulous manner, informing local overseas Chinese of matters that need special attention. The French Embassy in China previously told the Global Times that many French businesses and business people have also delayed their trips to China due to the outbreak.

The Global Times contacted several Chinese nationals in the US including senior media representatives in California. They all said that they had not heard of people planning to return to China recently, as many flights have been canceled and they are also concerned they may be infected during flight.

The number of confirmed cases in the US has exceeded 150. Many people have questioned the testing ability and scope of the US CDC, and many experts suspect that the actual number of infected people is much higher than the published number.

California is the third US state to announce a state of emergency.

Mr Wu who works in a large hospital in Los Angeles told the Global Times that Americans believe the coronavirus is just like the flu, while Chinese people are the most nervous group.

The US has limited ability to conduct nucleic acid testing, partly because they don’t have enough test kits and partly due to the expensive testing fee, said Wu.

When communicating with US doctors and public health experts, Wu found that the risk of a large-scale outbreak in California is slim. Take Los Angeles as an example. The city’s urban layout is loose, residents drive more often than they walk and people have more space than in Beijing.

Chen Xi, an assistant professor of public health at Yale University, told the Global Times that as many countries enter the community transmission stage, risk evaluation simply based on where tourists come from is not enough.

According to US media reports, among the infected in the US, 43 came from the Diamond Princess cruise; 15 had traveled to China, 11 to Italy and 2 to Egypt; and two had traveled to South Korea and Iran separately.

Newspaper headline: Potential risks in France and the US difficult to assess