As Covid-19 lockdown measures have forced employees to work from home and companies to upgrade their tech, demand for digital services globally has boomed. At the same time, demand for other service sectors, such as transport and tourism, has tumbled. According to a new report, the post-pandemic recovery and growth of cross-border trade in services, estimated to contribute more than half (55%) of all global trade flows, is expected to rely on digitalisation and the adoption of new technology.

Despite being more difficult to visualise than the trade of physical goods, and often overlooked because of this, trade in services increased by around 50% between 2010 and 2019 – double the pace of growth recorded in merchandise trade (Figure 1), according to the report by Western Union and Oxford Economics.

Figure 1: Value of global trade in goods and services 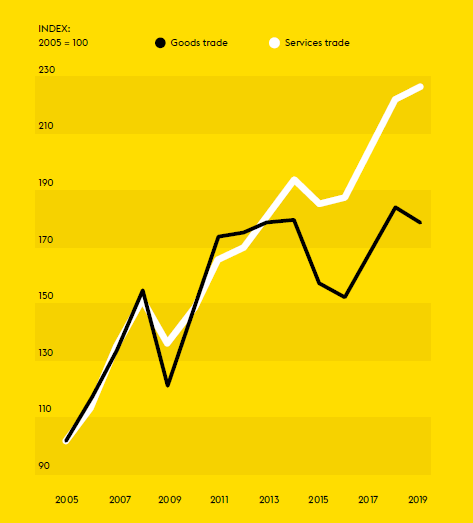 “Often little recognised, or grossly undervalued, the growing dominance of services industries over the past three decades has reshaped the global economy. Services now account for over two-thirds (68%) of global GDP and nearly half (49%) of all employment,” reads the report titled The global services trade evolution.

While some services still require face-to-face interaction, many services today – especially given the development of broadband networks and video conferencing – no longer necessitate physical proximity to be carried out.

This became evident during the height of the pandemic in Q2, as lockdowns and travel restrictions meant working from home was adopted swiftly across the globe. “Technologies that ease remote work have quickly grown in popularity, and millions of new customers have been introduced to online services including mobile banking, telemedicine, food delivery, online education, e-commerce, digital streaming services and social media,” reads the report.

The value of overall services trade is expected to increase by US$1.9tn between 2019 and 2025, taking its value from US$6.1tn to US$8tn. The report finds that business-to-business (B2B), ICT and financial services will contribute the majority (62%) of this growth.

It notes that in the long term, the cross-border outsourcing of B2B services will hasten as geographic location becomes less relevant to who undertakes these tasks. Furthermore, digitalisation will enable financial service providers in particular to increasingly deliver their products remotely, with little or no human interaction and at lower cost.

In trade finance, parties have turned to digital solutions, such as electronic signatures and fintech platforms which offer digitised documents, to ensure their trade finance deals and papers can be virtually inked.

The research by Western Union and Oxford Economics also finds that over the next few years, there will be greater investment in digital infrastructure: the value of ICT services is projected to increase by 35% between 2019-25.

More investment in digital infrastructure includes faster adoption of 5G technologies. According to stats from the GSMA as referenced in the report, telecom operators are expected to invest around US$900bn worldwide in 5G networks between 2020 and 2025.

“Combined with advances in automation, robotics and artificial intelligence, the range of what is possible to trade across borders may soon expand dramatically,” the report adds.

In contrast, in more traditional service sectors, the report finds that the pandemic will cause problems in both the short and long term. Tourism will be hit hard, with output collapsing by around 40% this year (Figure 2), while air passenger transport will decline by over 50%. Air freight will also see a large decrease, with a 20% reduction in 2020.

This lack of demand has resulted in aviation giants slashing their production and workforce. After announcing it would cut around 10% of its workforce, about 16,000 jobs, in April, US plane maker Boeing is reportedly planning another round of redundancies. At the end of June, Airbus revealed that it would be cutting 14,000 jobs in the coming months in order to safeguard the company’s future and align to lower production rates. 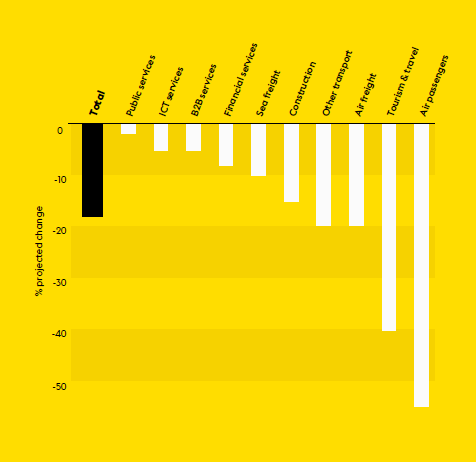 International tourism expenditure is expected to take three years to recover to 2019 levels, says the report. Travel for business and education purposes may increasingly be replaced by online interactions. Meanwhile, the outlook for transport and distribution is also dampened in the long term, as companies shorten their supply chains to improve reliability and diversify the risk of non-delivery.

The report, which also examines the outlook for eight large developed countries, finds that B2B services will be the main driver of export growth in the coming years (Figure 3), while financial services will boost growth in financial hubs such as the US, UK, Hong Kong and Singapore. 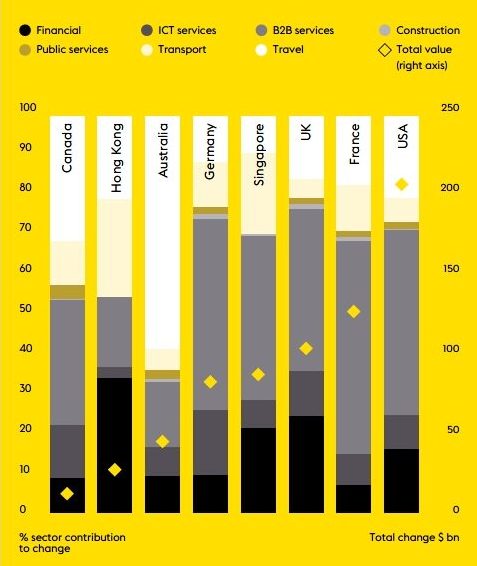 However, it finds that for developing countries, especially in Latin America and Africa, there remains an infrastructure gap when it comes to the trade of digital services. While B2B, ICT and financial services account for 55% of services trade globally, the United Nations Conference on Trade and Development (UNCTAD) estimates that digitally deliverable services account for just 16% of total services exports amongst least developed countries.