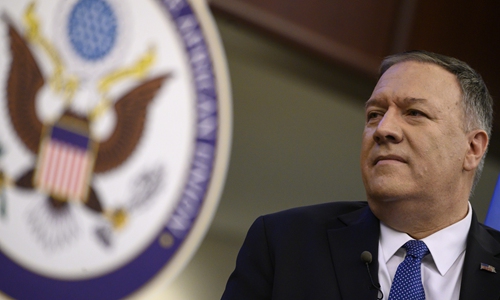 US Secretary of State Mike Pompeo during a speech in Addis Ababa on February 19, 2020. Photo: AFP

China condemns the “despicable actions” of some US politicians who are using the novel coronavirus pneumonia (COVID-19) to stigmatize China and Wuhan, a Chinese Foreign Ministry spokesperson said following US Secretary of State Mike Pompeo’s calling the virus the “Wuhan Virus.”

The World Health Organization has officially named the virus, but some US politicians do not respect science and the WHO’s decision, Geng Shuang, spokesperson of China’s Foreign Ministry, said on Monday’s media briefing.

“Remember, this is the Wuhan coronavirus that’s caused this, and the information that we got at the front end of this thing wasn’t perfect and has led us now to a place where much of the challenge we face today has put us behind the curve,” Pompeo said in an interview with CNBC on Friday, accusing China of not being transparent and open.

China has bought time and made positive contributions for the whole world in fighting the COVID-19 epidemic, and the world has clearly seen this, Geng said.

“Pompeo’s attempts to smear China’s efforts to fight the outbreak will not succeed,” Geng said.

Since the outbreak, China has been acting in an open, transparent and responsible manner by timely informing the WHO and relevant countries and regions, including the US, of the information, sharing the genetic sequence of the virus and actively responding to the concerns of all parties and strengthening cooperation with all parties, Geng said.

Instead of devoting energy to strengthening their country’s defenses against the virus, some US politicians are keen to blame China and pass the buck to Beijing. Chinese analysts said their actions reflect their lack of confidence in the US handling of the epidemic, and these elites hope to stigmatize China and are preparing to pass the buck.

The US government and officials, who have harshly criticized China’s response to the coronavirus epidemic, are caught under heavy fire for their response to the coronavirus outbreak in their own country, as American citizens frustrated over the persistently rising number of new cases are criticizing the country’s inefficient and bungled efforts to contain the outbreak and are demanding full transparency from officials.