Mask shortage reveals US failure to bring back factories 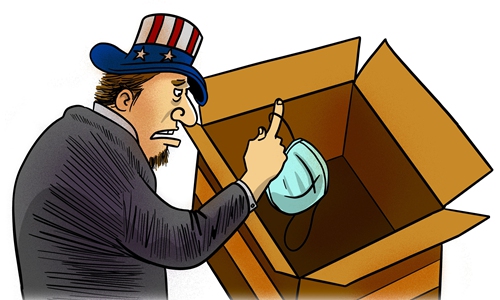 Even before entering the White House, US President Donald Trump boldly vowed to revitalize the US manufacturing sector. To fulfill that promise, the Trump administration has waged costly trade wars and pushed for a China-US decoupling. After the novel coronavirus broke out in China, US Commerce Secretary Wilbur Ross asserted that the epidemic would bring manufacturing jobs back to the US.

But US’ dire shortage of masks has clearly shown that those promises and predictions have not materialized. More importantly, it has shown that policies seeking to artificially shift the global supply chain are entirely misguided from the outset.

As the coronavirus spreads to many cities across the US and fuels widespread panic, many are rushing to buy up protective masks, leading to a mass shortage of the essential product for healthcare workers. The US Department of Health and Human Services estimated it only has just 1 percent of the 3.5 billion masks medical workers need to respond to a potential pandemic.

In the wake of the massive gap, US officials from Vice President Mike Pence to Director of the Centers for Disease Control and Prevention Robert Redfield have repeatedly urged the public not to stock up on the limited mask supplies. The shortage has even prompted former US President Barack Obama to weigh in, calling on the public to “save the masks for healthcare workers” in a tweet on Wednesday.

US officials have even reportedly asked several US mask manufacturers which have factories in Asia to start production back in the US and are considering plans to ask some US manufacturing firms in other areas to set up mask production lines.

Surely, such a plan would fit perfectly into US officials’ overall strategy to bring manufacturing back to the country. However, it is ill conceived and bound to fail, at least in terms of easing the shortage to help with the epidemic.

Plans to establish production in the US could also hit a wall as many have correctly pointed out that most materials necessary for mask production must come from Asia – more precisely from China, which supplies half of the world’s raw materials for masks. Needless to say, the process of building production lines from scratch would take a considerable amount of time, arguably the most critical element in the fight against the virus.

That leads us to a solution that many in China and around the world, including the US, have repeatedly called for since the US began to wage trade wars and since the epidemic began to spread across the world: global cooperation. These two words might frighten those who hold ideologically driven bias against China and strong anti-globalization sentiment, but the bottom line is that cooperation could save lives under the current circumstances.

China, even with its vast mask production capabilities, has also faced a shortage of masks and other medical supplies since the outbreak began. But within a very short period of time, its mask production has substantially increased.

It is more than likely that China would be able to export masks to the US after ensuring that the domestic market has sufficient supply. Of course, a more ideal scenario would be that there will be no need for masks once the epidemic is reined in, not just in the US but around the world.

However, even then, the underlying problem with the US strategy to change the global supply chain through its “America First” agenda should not be ignored. It is hoped that the US can draw a lesson from the epidemic and the staggering cost of the last few years to try to pursue a more constructive and rational approach in cooperating with China and the wider global community.

The author is a reporter with the Global Times. [email protected]