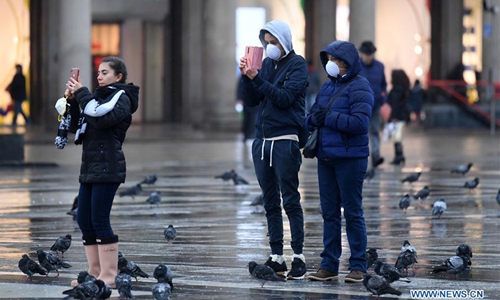 “Italians are still singing songs and dancing [without being influenced by the coronavirus], but the Chinese are horrified,” said Li Na, a Chinese national who runs a bar in Italy.

Li said more than 200,000 Chinese nationals live in Italy, mostly from Lishui and Wenzhou in East China’s Zhejiang Province, operate clothing factories or service businesses such as restaurants and bars. Li told the Global Times that not many Chinese people from Zhejiang that she knows in Italy have returned home due to the outbreak. “But many are planning to return or have booked flights,” she said.

Li said this is because the outbreak is spreading rapidly in Italy, but the country’s lax policies for epidemic control are at odds with the Chinese people’s sense of protection.

China’s National Health Commission reported on Friday that as of Thursday a total of 36 confirmed cases in China were imported from overseas, many of whom were people returning to Zhejiang.

On Sunday and Monday, eight imported cases were confirmed in Zhejiang, all people returning from Italy with the same destination – Qingtian county in Lishui, which is known as the “hometown of overseas Chinese.” Huzhou in Zhejiang announced on Thursday that it had two new cases imported from Italy.

Lishui Daily reported on Friday the federation of returned overseas Chinese in Lishui has cautioned Lishui residents overseas that “the return journey is extremely risky and there have been distressing cases of cross-infection on international flights back home.”

Li lives in a city just 20 kilometers from where Italy’s first confirmed case was reported. “At first the atmosphere was very tense, but within just two days it changed. I think it has something to do with the propaganda from the local government. At the height of the outbreak in China, Italy was also nervous, updating the numbers of confirmed cases every day. But when it was its own turn, it relaxed and now a lot of Italian people think this is just a normal flu,” Li said.

“My pub has been closed for over 10 days,” Li said. She noted that Chinese in Italy are generally nervous and a lot have closed their shops. But when they look around and see the measures taken by the Italian government and society, which are not strong, they are worried.

Many regions of Zhejiang have begun to strictly control the return of overseas Chinese. Although Li has no immediate plans to return to China, she has received a notice from her hometown – Wencheng county in Zhejiang’s Wenzhou – requiring her to make a health declaration in advance if she returns to China. Returnees need to undergo a quarantine after entering the country. She said Wencheng’s overseas Chinese federation and its leading group for epidemic control and prevention had also sent notices to Wencheng citizens living abroad, reminding them of matters that require special attention overseas and as they return home.

In Lishui, which sits next to Wenzhou, strict measures to prevent imported cases have been imposed. An official with Qingtian county told the Global Times that they have assigned personnel to airports in Shanghai, Hangzhou and Wenzhou to pick up people returning from overseas and take them to designated quarantine locations. No matter which country they return from, they will be taken to the county’s medical observation site to undergo a 14-day quarantine.

The official said the quarantine site now houses people who have returned from Italy and Spain. The preventive efforts in Qingtian have also been stepped up, with health monitoring points established at necessary entrances and exits and staff on duty 24 hours a day.

A worker of a Qingtian service group at Shanghai Pudong Airport told the Global Times that they had been stationed in Shanghai since February 29, and that at the beginning, most people they received were from Italy. Since Tuesday, people returning to Shanghai from Italy have been quarantined directly in Shanghai. Over the past few days, they have also picked up people from Spain, Germany, Switzerland and other countries.