MELBOURNE: The Indian women’s team will have to overcome big match pressure as it aims to exorcise the ghosts of the past in the T20 World Cup final against habitual winners Australia in front of a record crowd at the Melbourne Cricket Ground here on Sunday.

India go into the final unbeaten after topping the group stage where they had beaten the four-time champions Australia in the tournament-opener. 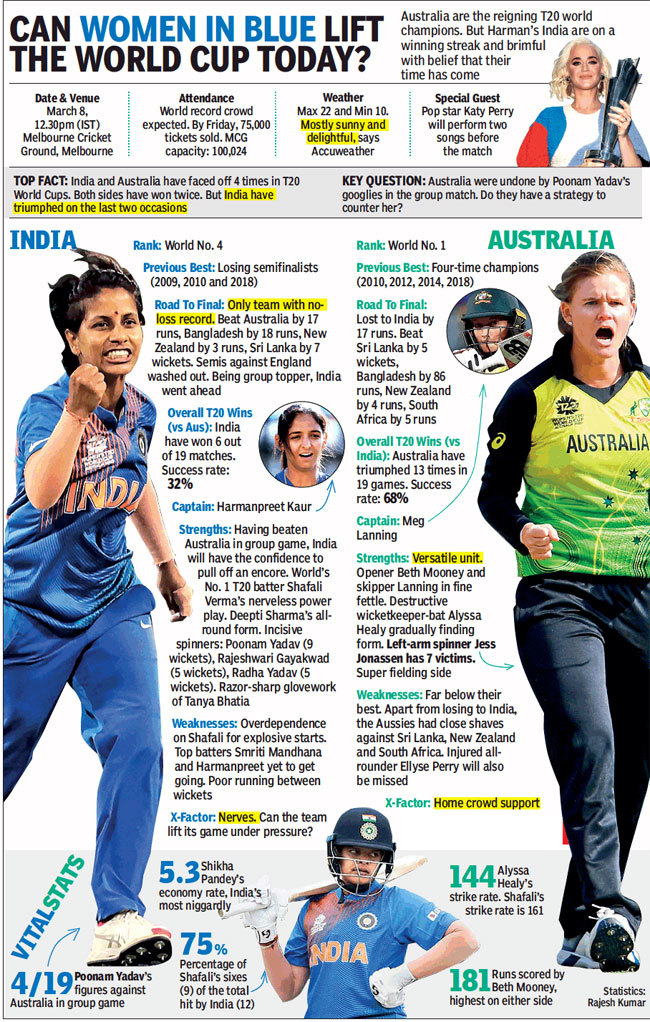 After the semifinal against England was washed out, the Harmanpreet Kaur-led squad advanced to their maiden summit clash, having finished first in Group A.

The refreshing firepower of 16-year-old Shafali Verma at the top and consistency of India’s spin-heavy bowling attack has contributed massively to the team’s success so far in the competition. 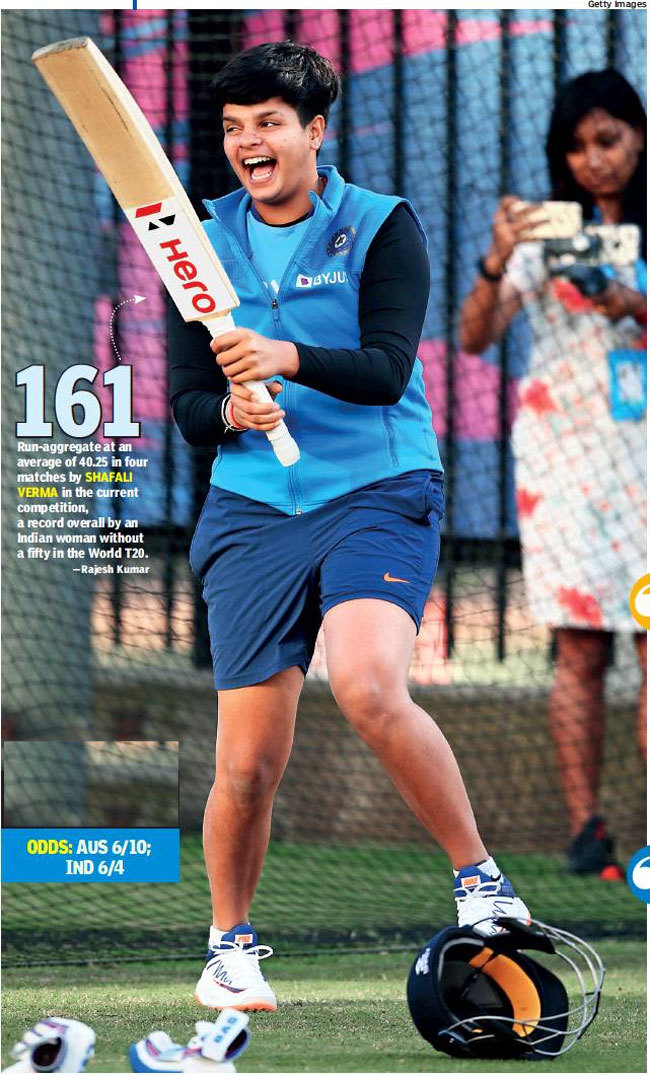 However, much more is needed from star batters Smriti Mandhana and Harmanpreet if India are to win their maiden ICC trophy.

The brittle middle-order too needs to deliver. And besides doing the right things on the field, India will also have to win the battle of nerves in the all important game.

Australia, who had beaten India in the preceding tri-series final, find themselves in familiar territory having made their sixth successive final in seven editions. 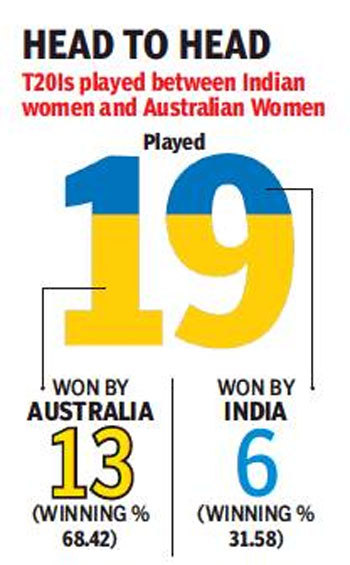 They know how to win the big moments in high-pressure games, while India have been found wanting on that front. The visitors had capitulated to England in the 2017 ODI World Cup final and 2018 World T20 semifinal.

It may be a tad unfair on the teenager but the team will expect Shafali to provide another flying start and hope this time the experienced Mandhana too fires. There can’t be a bigger stage for Harmanpreet to be back amongst the runs and lead the team from the front. 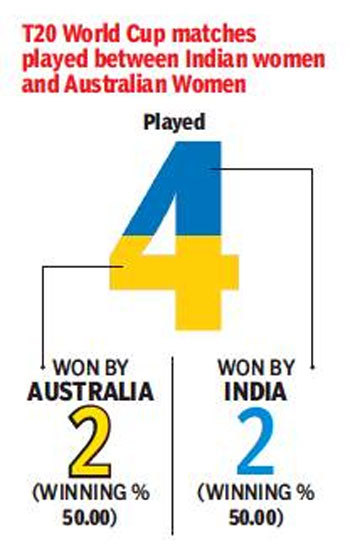 If it was not for Shafali, India would have struggled to post competitive totals with the middle and lower-order doing precious little. The team did not cross the 150-run mark in the group stage but still managed to get over the line, thanks to a disciplined bowling effort.

Leggie Poonam Yadav has made a sensational comeback from a finger injury and is tournament’s leading wicket-taker with nine wickets alongside Australia pacer Megan Schutt. 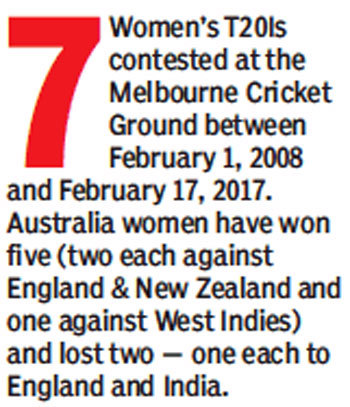 Pacer Shikhar Pandey too has been impressive, while left-arm spin duo of Radha Yadav and Rajeshwari Gayakwad has kept things tight.

It will be interesting to see how Australians play Poonam on Sunday as the leggie was all over them in the tournament opener.

More than 75,000 tickets have already been sold for the final and the figure could go as high as 90,000, unprecedented in women’s cricket.

Australia, led by Meg Lanning, are backing themselves to win in front of the home fans though a sizable number of Indian fans too is expected at the iconic MCG.

Lead men’s team pacer Mitchell Starc will also be in attendance, rooting for the home team and his wife Alyssa Healy after getting clearance to leave South Africa in the middle of the tour. 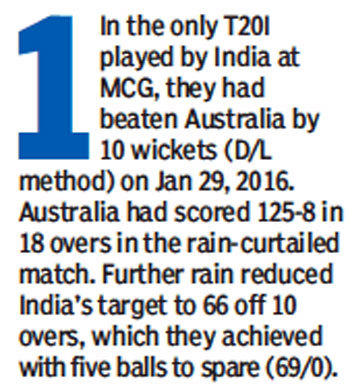 Australia’s campaign has been hit by injuries to pacer Tayla Vlaeminck at the start and star all-rounder Elysse Perry was ruled out of the remainder of the tournament before the semifinal against South Africa.

Despite the twin setbacks, Australia have stormed into yet another title clash. 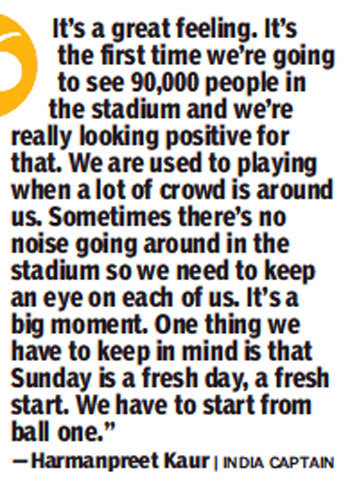 “We’re not coming just to put on a good show. We’re coming here to win and that’s the attitude we’re going in with. It’s been a long time coming and the build-up to the game is something I’ve not experienced before. It will be the biggest moment of my career,” said Lanning. 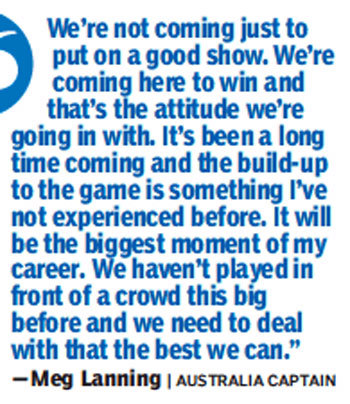