How big a threat are imported infections? GT's exclusive research into the risks 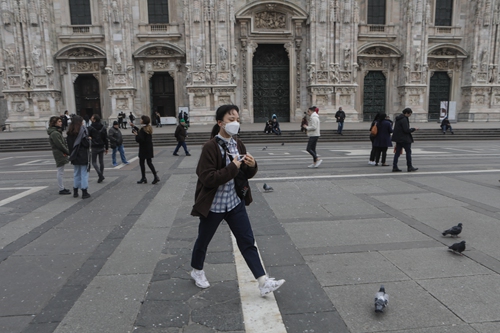 China’s National Health Commission on Friday announced that 16 out of the 17 new COVID-19 cases in China (outside of Hubei Province) reported on Thursday were infections of foreign origin – 11 were detected in Gansu Province from Iran, four in Beijing from Italy and one in Shanghai from Iran, further worrying the public of the risk of infections from overseas.

While China’s efforts to prevent and control the coronavirus have scored remarkable effects, new warnings are being issued overseas with ascending numbers of infections reported every day, making the risk of imported outbreaks in China an urgent issue.

Officials from East China’s Zhejiang Province said on Friday it will put preventing imported cases of COVID-19 as a top priority. Zhejiang so far reported 1,215 cases of coronavirus infection as of Friday morning, within which 10 cases were of foreign origin.

Media reported all of the imported cases these days are sent directly from airports to designated places, which demostrates China’s more robust precaution system. 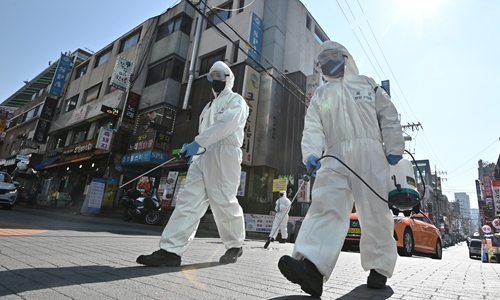 South Korean soldiers wearing protective gear spray disinfectant on the street to help prevent the spread of the COVID-19, at Gangnam district in Seoul on Thursday.  Photo: AFP

In addition to countries that are being haunted by coronavirus which include Italy, Iran, South Korea and Japan, China should also pay attention to other countries including Kuwait, Bahrain, Thailand and Cambodia, and also parts of Europe, Wang Peiyu, associate dean of the School of Public Health at Peking University, told the Global Times.

There are two major ways to prevent imported cases, Wang said. “One is to conduct strict temperature checks and register past travel history at the time of entry. And the other is to urge citizens to avoid going to countries with major outbreaks.”

Data also showed that from February 25 to Tuesday, the majority of flights arriving in China from South Korea landed in Beijing, Qingdao in East China’s Shandong, Shenyang in Northeast China’s Liaoning, and Yanji in Northeast China’s Jilin. Most flights from Japan arrived in cities including Shanghai, Beijing, Guangzhou in South China’s Guangdong and Dalian in Liaoning.

Domestic airports have strengthened the management of arrivals from countries and regions with severe epidemic situations, according to documents the Global Times obtained from several airports. 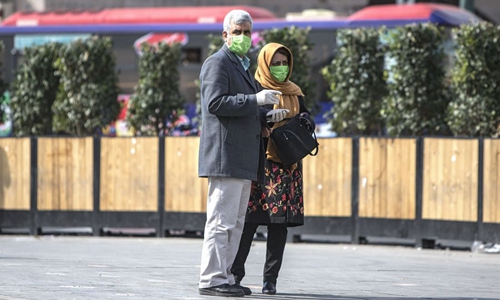 For instance, the Xiamen airport requires all airlines to register, collect data from passengers and screen all those who have been to countries including Japan, South Korea, Iran, Italy and Singapore in the past 14 days. Zhejiang’s airport requires airlines to inform destination airports in advance of transited flights from Japan, South Korea, Iran and Italy, as imported infections have recently entered China via transit locations like Moscow airport.

Currently, China faces several battlefields as it is a highly globalized economy and it is impossible to ban all visitors from entering, Chen Xi, an assistant professor of public health at Yale University, told the Global Times.

“The most important task is to quickly identify risks at the entry point. The government can also consider requisitioning some facilities near major airports for the purpose of implementing quarantines for passengers with higher risks,” Chen said.

On Thursday, the number of new confirmed cases of COVID-19 in China was 143 (126 in Hubei, the epicenter of the outbreak), while the WHO reported on Thursday (local time) that a total of 14,768 new cases of the coronavirus had been confirmed in 85 countries outside China, with a total of 267 deaths. Statistics from National Customs showed that before Thursday, a total of 6,728 passengers entering China had shown symptoms, of whom 779 became suspected cases and 75 later tested positive for the virus through nucleic acid testing.

How big is the risk of imported coronavirus? Where are imported cases coming from? The Global Times has exclusively investigated the situation on the ground in Italy, Iran, South Korea, Japan, the US and France to find answers:

“Italians are still singing songs and dancing [without being influenced by the coronavirus], but the Chinese are horrified,” said Li Na, a Chinese national who runs a bar in Italy…

To leave Iran, S.Korea or not

Zhang Ming (pseudonym) returned to China from Iran on a chartered flight on Wednesday. He told the Global Times that he had been studying and living in the holy city of Qom, one of the worst-hit cities in Iran. As more and more deaths were reported in Iran, he became increasingly nervous as the country’s medical facilities are not good…

Risks rise in France, US

France, Germany, Spain and the US are considered countries where outbreaks are increasing in severity. Take France as an example. Cao Huaqin, a businessman from East China’s Fujian Province who lives in France, told the Global Times…

Newspaper headline: How big a threat are imported infections?