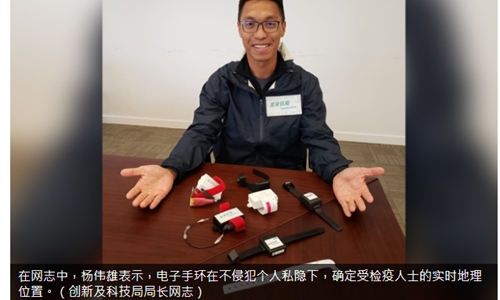 The Hong Kong government is promoting a new type of smartband from this week for those under quarantine and observation amid the threat of the coronavirus.

With techniques like Bluetooth and Geo-fencing, the smartbands are able to detect the real-time geo-location of a quarantined person without violating privacy, but through analyzing the signal changes of telecommunications networks, Wi-Fi, Bluetooth and GPS, said the government.

The smartbands, produced by the Logistics and Supply Chain MultiTech R&D Center (LSCM) of Hong Kong’s Innovation and Technology Commission, started development in January. The smartband is a way for health authorities to monitor those who have the risk of coronavirus infection and make sure they will stay in a quarantine location or at home for 14 days.

In early February, the government asked residents returning from Hubei to wear smartbands and isolate themselves from others. Anyone who breaks the rules would be fined HK$5,000 ($643) and jailed for six months.

Before this week, there was only one type of smartband used in Hong Kong, which is also produced by LSCM but is relatively heavy and thick.

There have been concerns over personal privacy, but according to experts, the smartband will not collect personal information or location. It just gives an alert when the person wearing it leaves the designated area.

The Global Times learned that the smartband is connected with an app through Bluetooth on a government-designated phone, which is set and charged in the quarantine spot.

Alerts will be sent to the cloud backstage run by the telecommunication and health authorities if the band’s carrier turns off the phone or its power is cut off, or the carrier is more than 30 meters away from the phone.

“We are using a new type of band widely this week, which is much lighter and disposable for ordinary visitors,” Simon Wong, chief executive of LSCM, told the Global Times on Monday. According to Wong, the previous version will be still produced for the elderly who cannot use a smartphone and those from epidemic centers and staying in the government-designated spots.

Wong said they started to produce smart bands since late January. Due to the closing of factories amid the coronavirus, they had to produce by themselves until mid-February, when they found some partner factories in the Greater Bay Area. Now they are able to produce 3,000 to 10,000 pieces of the thick version bands a month and tens of thousands of the lighter bands. But the actual output depends on demand from the Hong Kong SAR government.

Nicholas Yang Wei-hsiung, the secretary for Innovation and Technology of the Hong Kong Special Administrative Region, said on Sunday that the city has built domestic production lines with the assistance of seven partners.

Wong told the Global Times that the smartband is now rarely used in the Chinese mainland and Taiwan because of strict traffic restrictions in the two places.

But smartbands may be necessary when the epidemic improves and more people return to work to make sure office workers are not going elsewhere but home after working time.