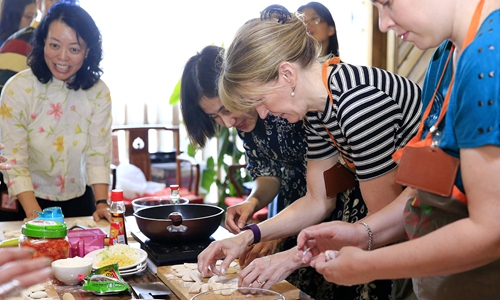 Foreigners learn how to make dumplings in a neighborhood in North China’s Tianjin Municipality. Photo: VCG

A draft for regulations on permanent residence applications for foreigners to the People’s Republic of China has been a hot topic of debate on Chinese social media since its release, with some netizens worrying about the standards set for foreign talents.

There have been many examples throughout the history of the country of people coming from overseas who spent the rest of their lives working in China, even earning valuable trusted positions within the government.

Throughout Chinese history, especially during the Qing Dynasty (1644-1911), some foreigners who made outstanding contributions to the nation were given special treatment, even becoming officials in the Qing government, such as Ferdinand Verbiest from Belgium. Known as Nan Huairen in Chinese, he was the science teacher to the Kangxi Emperor during the Qing. He lived in Beijing for 28 years before passing away in the capital.

Johann Adam Schall von Bell, a German Jesuit and astronomer whose Chinese name as Tang Ruowang, is another example. He spent most of his life in China and earned the trust of the Qing Dynasty’s Shunzhi Emperor, becoming an advisor of the government.

Tang arrived in Beijing in 1630 and participated in the modification of the Chinese calendar during the Ming Dynasty (1368-1644), compiling what is known as the Chongzhen calendar.

After the Ming Dynasty fell, the German continued to work as an official in the new Qing government. He was put in charge of royal sacrifices to the gods, etiquette and also the astronomical calendar.

In 1666, the Qing government even held an official funeral in Beijing to mourn the foreign official, commenting that Tang had spared no effort in the performance of his duty in researching astronomy and the calendar and served the country with his talents.

Tang played a significant role in the history of science and technology in China as today’s Chinese calendar is based on the one he helped establish.

A British military officer named Gordon abandoned his position in the British military to help the Qing army pacify a region in what is now the Ili Kazak Autonomous Prefecture of Northwest China’s Xinjiang Uygur Autonomous Region. He was treated as a senior Chinese officer.

According to historical records, Gottfried Wilhelm Leibniz, a prominent German polymath and one of the most important logicians, mathematicians and natural philosophers of the Enlightenment, once wrote a letter to the Kangxi Emperor asking if he could become a Chinese citizen and suggested that a scientific academy be established in Beijing.

The records do not show whether his wish was granted, however.

These foreigners played important roles in Chinese history and contributed greatly to the country’s development.

While these individuals were able to contribute through their considerable talents, many Chinese are worried that the standards for introducing foreign talents and providing permanent residence may be too lax.

“I think these standards should be more restricted and strict, which will ensure that only true foreign talents will be introduced to China instead of people who will be difficult to manage,” a white-collar worker living in Beijing who asked for anonymity told the Global Times on Thursday.

“I am worried about the problems of managing foreigners in China,” Mei Xinyu, a research fellow at the Chinese Academy of International Trade and Economic Cooperation, said. He pointed out that some foreign students who misbehaved have disrupted social order and enraged Chinese people in the past.

It is easy to understand why a draft regulation that is so open to immigrants would spark Chinese people’s discontent and anxiety, Mei said.

According to the first nationality regulation published at the end of the Qing Dynasty in 1909, foreigners who apply for Chinese nationality must meet five conditions including being upright, possessing brilliant talents and having made contributions to China.

Netizens said that the Ministry of Justice of China, which wrote the regulations, should reconsider current standards to prevent issues in the future.