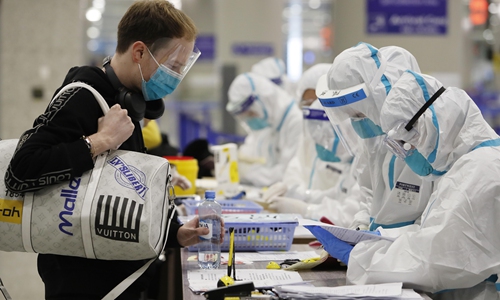 A foreigner submits a health declaration at an airport in Shanghai on Monday. Shanghai airport authorities enhanced management at Pudong and Hongqiao airports as the COVID-19 epidemic worsens globally. Photo: cnsphoto

Airlines and airports in China have further strengthened prevention work amid the flow of travelers arriving in the country, as the novel coronavirus pneumonia seems to be coming under control in China while infected numbers are increasing globally.

Staff at Frankfurt airport asked passengers if they were flying to Beijing or Shanghai and whether they had gone to Italy, Iran, South Korea or Japan in the past 14 days before giving passengers their boarding pass.

At Frankfurt airport, notices written in Chinese and English were posted at gates for flights to China reminding transfer passengers to input their passport information. Passengers to Beijing had to register their information in an app called “Jingxin Xiangzhu” and provide information of their residential community or hotel after arrival.

Many international passengers flying to China reached by the Global Times confirmed that simpler food and bottled water was served during the flights, and attendants took their temperatures regularly.

Passengers flying to China were also required to fill in a health declaration card, which included contact information, whether the individual had gone to Hubei or had contact with COVID-19 confirmed cases in the past 14 days, and asked if the passenger had cough or fever symptoms or had taken medicine for colds.

Those who do not fill in the form faithfully “will be held accountable according to laws and regulations,” a notice on the card read. 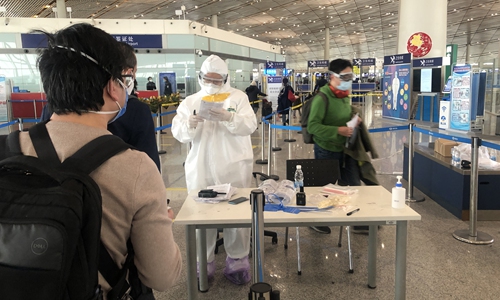 International passengers line up at a distance of 1 meter between each other when handing in the health declaration cards at the Beijing Capital International Airport on Sunday. Photo: Liu Xin/GT

A member of staff from Air China, who asked for anonymity, told the Global Times on Sunday that China’s aviation authority has required several prevention measures to be taken during flights to China – flight crew are regularly disinfecting the cabin, monitoring passengers’ temperatures before letting them board and during the flight and reserving seats for emergencies.

During the flight, flight attendants would pay close attention to whether passengers wear masks properly and would remind those who exposed their noses and mouths not to do so.

A Global Times reporter took CA932 from Frankfurt to Beijing on Sunday.. Upon arrival, after waiting for an hour in their seats, passengers in every five rows were asked to get off the plane in a batch to undergo quarantine inspections.

A passenger named Jia who flew from New York to Shanghai on Thursday told the Global Times that it took 25 minutes to enter the terminal after landing.

Another passenger who flew from Russia to Shanghai Pudong International Airport on Friday said his plane landed around 9 am but he reached to the exit at 2 pm.

Within half an hour after landing in Beijing, the Global Times reporter received calls from the residential community and neighborhood committees  reminding the reporter to self-quarantine and report temperature every day.

A member of staff from an airline in China told the Global Times that airports in Shanghai and Hangzhou have taken strict measures for checking international flights -aircraft carrying passengers with a fever or from certain countries would be asked to land in remote aprons. Quarantine officers then carry out a thorough inspection on the plane before passengers are allowed off, and the aircraft are also required to be disinfected afterwards.

Lin Tongtong (pseudonym) who flew from Italy via Frankfurt to Beijing and then Xiamen in Fujian Province, told the Global Times that she was accompanied by staff from her residential community to take a nucleic acid test and was led to a designated hotel for a 14-day quarantine.

She received a notice which said the test she had was free of charge and that she would be informed of the result within two days by phone.

“I had many tests during the trip home, but enjoyed VIP service. I did not need to pick up my luggage by myself and after arriving at the hotel, the staff gave me a thorough disinfection,” she said.