“Stay Strong, Wuhan!” “I want to watch Jay Chou’s concert!” “I will marry you after the epidemic!” “I will buy you a handbag when I get back home!”… Chinese medical workers have been creatively using graffiti on protective suits to cheer each other up, communicate with concerned families and express their feelings when their bodies and faces are covered with head-to-foot protective gears.

The messages are not only viewed as a special channel to connect society with heroes at the frontline, but a special record of the country’s step-by-step improvement in the tough war against the epidemic.

At the beginning, medical workers wrote their names on the back of the protective suits to make it easy for them to recognize each other, as their protective suits are the same and their faces are covered by masks and glasses, Zhang Li, a doctor from the Zhongnan Hospital of Wuhan University, told the Global Times on Monday. “Some people also wrote some simple sentences like ‘cheer up’ and ‘stay strong, Wuhan’ to encourage themselves and the patients,” Zhang said, noting that messages on the protective suits were simple and direct when they entered the makeshift hospital as they had to attend to patients immediately after putting on the suits.

But the medical workers got more and more creative as the epidemic situation developed and improved. 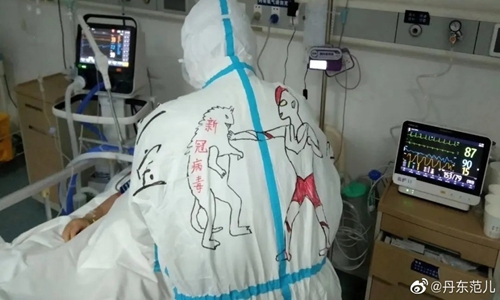 Medical workers from Jiangsu working in a children’s ward in a hospital in Huangshi, also in Hubei Province, drew cartoon images like dolphins and Pikachu on their suits to get closer to their little patients and eliminate the latter’s fears.

One of the Jiangsu medical workers even drew an image of a person hand-wrestling with a coronavirus on the back of the protective suit, expressing the team’s strong confidence in winning the tough fight.

Some veteran medical workers in Central China’s Hunan Province who experienced the SARS crisis in 2003 took out “battle suits” they used at that time.

A nurse named Shen Qun in Hunan Province said it was a spiritual inheritance when she put on the suit her predecessors used 17 years ago overcoming SARS. A picture of Shen wearing a reusable isolation suit with both “SARS” and “COVID-13” written on the back swept Chinese social media in mid-February, touching and encouraging millions of netizens.

On Valentine’s Day, many medical workers wrote “I love you” “I miss you” on their suits and caps to express feelings of love for spouses and children.

As the epidemic situation keeps improving, some medical workers are writing their hopes for life after the epidemic.

“Yibo, wait for me,” a nurse from Beijing working in Wuhan wrote on her suit, saying to the media that she wanted to meet singer and actor Wang Yibo after the epidemic. 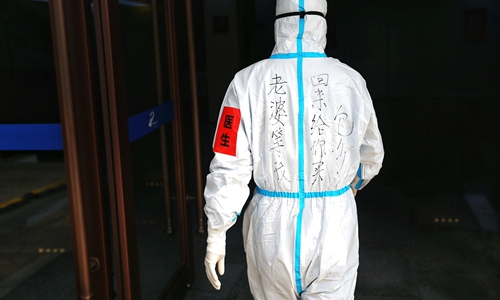 Wang Jun, a doctor from the Hubei Cancer Hospital, wears a protective suit with “Laopo [wife in Chinese], I will buy you a handbag when gettingI get back home!” written on the back. Photo: Cui Meng/GT

Wang, who was famous for playing in TV series The Untamed, responded on Sina Weibo on Monday that he would invite the nurse to watch his show after the epidemic.

Wang Jun, a doctor from the Hubei Cancer Hospital, wrote on his suit “Laopo [wife in Chinese], I will buy you a handbag when I get back home!” He had not been home for more than one month, he told the Global Times.

“Laogong [husband in Chinese], daughter and son, I will be back soon!” another photo went viral on Chinese social media recently showing the back of a medical worker with these words, which cheered many netizens up as they viewed the picture as a hopeful signal that the epidemic will end soon.
Newspaper headline: Graffiti on medical suits show progress of epidemic fight