Democrats in six states vote for party leader on Tuesday 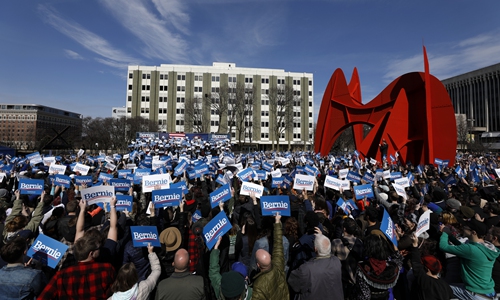 Democratic presidential hopefuls Joe Biden and Bernie Sanders secured crucial endorsements on Sunday from prominent black supporters just days ahead of the first round of voting to pit them in a head-to-head contest.

Senator Kamala Harris, a former Democratic candidate herself, endorsed Biden, while Sanders won the backing of civil rights leader Jesse Jackson as the rival candidates competed for African American support – a key demographic in the fight for the party’s nomination.

Voters in six states go to the polls Tuesday, a week after the “Super Tuesday” elections dramatically reversed the two men’s fortunes, snatching the frontrunner’s title from Sanders and revitalizing Biden, who now holds a lead in delegates to the nominating convention.

Biden did well on Super Tuesday in Southern states with large black populations, states similar to Mississippi, which votes on Tuesday. And in Missouri, a Midwestern state also voting Tuesday, one recent poll gives him a 22-point lead.

That makes Michigan, the day’s biggest prize, an almost must-win for Sanders. A survey in that north-central state last week gave Biden a six-point advantage.

“Joe has been there for Michigan when our back was against the wall,” Governor Gretchen Whitmer told AFP on Sunday, during an appearance at a majority black church in Detroit.

Michigan’s critically suffering auto industry received a major boost in 2008 from a massive intervention under the administration of Barack Obama and Biden.

But Whitmer predicted a close race on Tuesday; Sanders has a large organization in Michigan with considerable union support.

Sanders, desperate to kickstart his campaign after losing 10 of the 14 Super Tuesday states, has canceled plans to speak in Mississippi, Missouri and Illinois in order to focus on Michigan.

Jackson endorsed Sanders at a rally in Grand Rapids, Michigan, repaying the self-described democratic socialist for having supported his 1988 bid for the White House.

“Sanders has a better chance at beating Trump than Biden does,” Sara Long, 25, told AFP as she stood in line for the rally.

“I think that a lot of his views are more progressive, and they’re what this generation is looking for,” she said.

Sanders touted Jackson’s endorsement, telling supporters at the rally in Ann Arbor, Michigan, that he was “one of the true heroes of modern America.”

Sanders called on his supporters to come out in force on Tuesday. “If you get your friends in the political process, there’s no stopping us,” he said.

Biden’s Super Tuesday surge brought an influx of donations – $22 million in the past few days, his campaign said in a statement on Sunday.

It said $12 million would be spent on hiring new staff and launching a major media campaign in battleground states.

Harris said she was backing Biden, a centrist who touts his ability to work with Republicans, because she believes he can best unify the country going into the crucial November elections against Donald Trump.

“I am with great enthusiasm going to endorse Joe Biden for president of the United States,” she said in a videotaped statement posted on Twitter.