Debates around Northwest China’s Xinjiang Uygur Autonomous Region have repeatedly appeared at Room 20 in the UN office in Geneva during the 43rd session of the UN Human Rights Council. Representatives of some Western countries attacked China’s policies in the region with clichés and baseless rumors while Chinese diplomats and scholars strongly argued with facts and data.

From the High Level Segment meeting to the general debate, representatives from some countries, including UK, Australia, Belgium, Iceland and Luxembourg, and some NGOs frequently criticized China for “violating human rights” in its Xinjiang and Hong Kong Special Administrative Region. Some Western representatives called for an “independent investigation” of the High Commissioner into Xinjiang.

Minister Jiang Duan from China’s Permanent Mission to the UN refuted these accusations by saying that “topics related to Xinjiang are not human rights, religion or ethnic issues. They are about anti-terrorism and anti-separatism.”

“China’s Xinjiang region has taken a series of counterterrorism measures, including establishing vocational education and training centers. All the trainees have graduated and found employment. China has invited many European diplomats to visit Xinjiang many times, for which they refused or made excuses not to come. They had no interest in visiting China but kept accusing China at the UN Human Rights Council, which makes us think about their political purpose,” Jiang said.

Jiang called for these countries to put aside their prejudice and stop making groundless accusations toward China. He noted that China has invited UN High Commissioner to visit China and its Xinjiang region this year.

Some Western countries and anti-China forces continue to use UN international meetings to attack China’s work on human rights and accuse China of using its increasing influence to “weaken” the UN mechanism. However, with more Chinese scholars and nongovernmental organizations coming to the international venues to share the truth about China, their unfair accusations and lies about China have been gradually exposed to the world.

Some experts commented that as some Western countries and NGOs politicize UN meetings and use human rights topics to attack China, especially on its counterterrorism work in Northwest China’s Xinjiang Uygur Autonomous Region, Chinese diplomats, NGOs and scholars have been dragged into a dumb war of debunking rumors and lies. 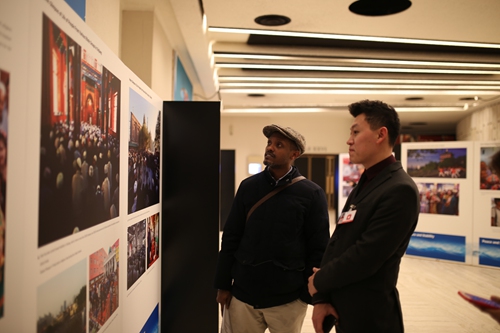 Visitors look at a photo exhibition themed on Northwest China’s Xinjiang Uygur Autonomous Region at the UN office in Geneva on Monday. More than 100 pictures and videos were collected to showcase the colorful life of different ethnic groups living in Xinjiang. Photo: Liu Xin/GT

NGOs and Chinese scholars who came for academic exchanges at the UN venues were also compelled in the “battle” of refuting unfair and groundless accusations.

An international symposium on counterterrorism, de-radicalization and human rights protection was held on Monday with scholars from China, Cameroon, Serbia and Sri Lanka. Questions raised at the Q&A session were all about Xinjiang.

An audience who claimed to be from an international NGO mentioned that 12 UN experts signed a joint letter to call for attention to the “abuse” of Uygurs in Xinjiang. A similar question was asked at another side event held by a Chinese NGO the previous week by the same person.

Li Wei, a counterterrorism expert at the China Institute of Contemporary International Relations, responded that “I don’t know whether these experts are specialized in counterterrorism and de-radicalization studies, whether they have been to Xinjiang or talked to residents in Xinjiang about their views.”

“Do people from the West hope Xinjiang residents live in the fear of terrorism. Do they think this situation is what they called about ‘protecting human rights?'” Li asked. The audience gave no answer.

“Instead of wanting to have an academic discussion over a certain topic, some participants raise provocative and political questions. We scholars still give our views with facts or data to dismiss understandings. This kind of communication, although it looks aggressive, can also help us to know other’s concerns,” Li told the Global Times.

With the help of China’s Permanent Mission to the UN, China Society for Human Rights Studies held a photo exhibition at the UN office on Monday in which it presented 100 pictures and some videos on the life of ethnic groups living in Xinjiang.

During an incident at the photo exhibition, a woman, who did not speak about her identity, yelled that pictures were “lies.”

Liu Zhengjiang, a professor from Xinjiang University, who came to attend the UN session, tried to approach her, but the unidentified woman abruptly left.

“I felt confused as well as disappointed of why the woman thought the truth about Xinjiang showed in the photos are lies. Maybe she has been misled by some media reports or rumors. As a scholar who come from Xinjiang and lived in Xinjiang for all my years, I wanted to share with her with my truthful experience, but she had gone,” Liu said.

For foreigners who have interest in knowing the truth, side events like the Monday photo exhibition held by Chinese NGOs did help understand the situation in China, according to some attendees.

Francesca from an advisory service who came from Italy told the Global Times that she was enchanted by the “fascinating cultures and landscapes of Xinjiang showed in the pictures.”

“I want to visit the place by myself in the future,” Francesca said, noting that she does not believe what some Western media said about Xinjiang. She added that some media “always tell lies” and they have no right to “judge anything without seeing by themselves.”

Brook from Ethiopia stood in front of the photo of Shaanxi Mosque in Yining of Xinjiang for a long time and after learned the mosque was built in a style of the traditional Chinese architecture, he seemed surprised.

“I knew little about Xinjiang before but through these pictures, I can get a glimpse of the culture and people’s life in the region. The mosque built in a Chinese temple-style shows that how religions and cultures merged together here,” Brook told the Global Times.

“Many people outside China have little knowledge of Xinjiang and they are easily misled by unbalanced reports or anti-China forces living overseas. It is a pity to see people have been fooled and this is also why we should come to attend these international meetings to let more people know about the truth,” Erkin Samsak, a professor from the Law School of Xinjiang University, told the Global Times after voluntarily helping introduce some photos to visitors at the exhibition.

The Global Times reporter saw Dolkun Isa, a separatist of the World Uyghur Congress, an organization that has connections to the terrorist group “East Turkistan Islamic Movement,” talking to people in the UN office in Geneva. The WUC held a photo exhibition at the Broken Chair Square with banners accusing the Chinese government of “detaining” Uygurs in Xinjiang.

The Global Times found that photos of Uygur scholars have been misused by WUC in making their lies. Few people came to join WUC’s event and its members hastily withdrew the tent on the last day of the “event.”

Observers said these separatist organizations, which have developed many relations with the governments of Western countries, spread numerous rumors and cooperated with NGOs and media to slander China with the purpose to seek personal gains or cater to the West’s target to contain China. The situation adds more difficulties for China to clarify the facts and dismiss understandings.

But the situation has gradually improved in recent years as China has actively participated in international affairs and more Chinese experts and NGOs come to attend international events.

“The presence of Chinese scholars will at least make some think twice before making irresponsible comments on China. Most people outside China, unfortunately, receive their China information from Western media, so Chinese scholars at international venues like UN could be an alternative source of China information,” Zheng Liang, a professor with the School of Journalism and Communication at Jinan University, told the Global Times. 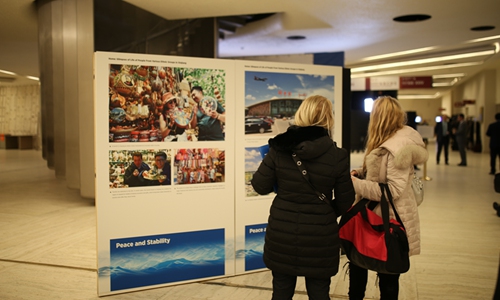 Visitors look at a photo exhibition themed on Northwest China’s Xinjiang Uygur Autonomous Region at the UN office in Geneva on Monday. More than 100 pictures and videos were collected to showcase the colorful life of different ethnic groups living in Xinjiang. Photo: Liu Xin/GT

Many scholars and NGOs reached by the Global Times were welcoming more Chinese scholars and NGOs coming to attend international meetings since they can offer “the other side of the stories on China” which was usually willfully neglected by some Western media.  However, some countries and anti-China forces took the chance to criticize the Chinese government for supposedly “infiltrating” the UN mechanism.

It is ridiculous and biased to criticize China for weakening the “UN” mechanism since amid some Western countries’ attempt to politicize the UN, China is fulfilling more responsibilities for the international community and balance forces among different countries, Chinese experts said.

Professor Jayanath Colombage from Sri Lanka told the Global Times that aside from reading reports from US or other media “like the Washington Post or the New York Times, people in the world need to hear voices from China.”

“It is necessary for more Chinese scholars to attend international seminars outside China as they, as independent scholars, could offer their side of the stories on China,” he said, noting that for those who choose not to listen to these different voices, they may start to listen after more voices coming from China have been told frequently.

Gabriel Aguirre from an NGO in Latin America, told the Global Times that “It is very important to listen to the opinion from China in relation to the different issues that are discussed by the UN. The possibility of having academics and specialists from China contributes in an important way to deepening the study and understanding of the different topics related to China and the problems of the World.”

China plays a fundamental role in the international arena. The UN system is decisive to build agreements of understanding between different countries and China could also use its increasing influence to balance the forces in the world, he said.

Liu Zhengjiang said that compared to scholars and NGOs from other countries, Chinese are still new to many international arenas, including the UN Human Rights Council.

“We still need more time to get familiar with the rules of UN meetings, develop more relations with our foreign peers, and learn how to tell our stories in the way they can better understand,” Liu said.