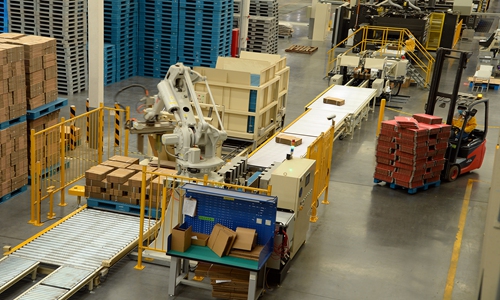 A robot arm helps pack components in a traditional manufacturing facility in Taicang, East China’s Jiangsu Province on Tuesday. Many robots acquired in recent years in the city amid industrial upgrades have been put into use since work resumed after the Spring Festival holidays. Photo: cnsphotos

Those who weeks ago advised multinationals to diversify their supply chains away from China and into Southeast Asia must now accept the fact that the coronavirus outbreak cannot reshape global supply chains where China has become highly integrated.

Despite disruptions caused by the outbreak, China’s supply chain dominance will remain intact for the foreseeable future.

If anything, the epidemic has only made the world even more aware of the reliance of China. As McKinsey said in its 2019 China and the World report, reflecting on China’s rise to a leading trading nation, the rest of the world is becoming more exposed to China. China’s share of the global goods trade increased from 1.9 percent in 2000 to 11.4 percent in 2017. China is the largest export destination for 33 countries and the largest source of imports for 65 countries.

And the same is true for the US, which can never truly decouple from China though some have not been tired of clamoring for a break. They claimed weeks ago that the coronavirus outbreak would speed up a China-US decoupling more than the trade war, as businesses need to think about their supply chains for the long run.

However, as the US is now facing the threat of a coronavirus epidemic, the rhetoric, which attempts to cut China out of US supply chain, will die out as Americans are now more concerned about the insufficient supplies of everything from medical goods to daily necessities rather than where they are made.

As for business, companies will not leave China simply for political reasons as nowhere else can offer China’s comprehensive manufacturing chain. Southeast Asian countries are currently unable to handle an industrial transfer in terms of infrastructure, number of workers and technology.

Moreover, China is gradually recovering from the disruption caused by the outbreak, with great efforts being made to bring its factories back to normalcy. With the production of some key products resuming, China is also strengthening communication and cooperation with its trading partners to soften the blow to global supply chains. It thus makes more sense for multinationals to wait for China’s return instead of muddling the supply chain.

In the globalization era, there is no such thing as a country that controls another’s industrial chain, and that is certainly not the case for China-US trade. The two economies’ supply chain cooperation is mutually beneficial and win-win; were it not, businesses from either side would not have started working together.

China is not forcing any country to do business with it, so those who believe it is in their interest to cut China out of their supply chain are welcome to try.