1. Drop a catch or two, lose a match: In the first four overs, India dropped two vital catches. Shafali Verma spilled Alyssa Healy when she was on 9. Her opening partner Beth Mooney was dropped by Rajeshwari Gayakwad when on 5. Both Healy and Mooney went on to plunder India.

3.  Overdependence on Shafali: India was used to getting electric starts by Shafali Verma. Her early dismissal literally ended the chase because every other top batter was out of form. 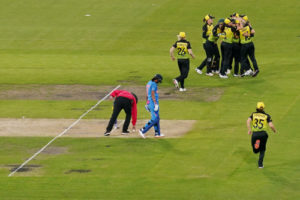 4.  Australia lift their game: Australia enjoyed the big stage. The 86,000 plus crowd got their money’s worth. Healy made Indians pay for the early miss and played an astonishingly aggressive innings (75 off 39) that brooked no reply. Mooney, the tournament’s highest scorer, anchored them (78 not off 54) to an intimidating 184/4.

5. Smart strategic thinking: The hosts were foxed by Poonam Yadav’s googlies in the group game. They found ways to deal with it. India didn’t seem to have any special plans to counter Healy and Mooney. If there was, it wasn’t evident. India stuck to what it had been doing successfully for the past few games. There was no Plan B

Summary: In the final, Australia produced their best, India their worst

DISCLAIMER : Views expressed above are the author’s own.